Bernardo De Muro was born in Tempio Pausania on 3rd November 1881 and died in Rome on 27th October 1955. He only attended elementary school. He started singing by teaching himself the songs of his land. 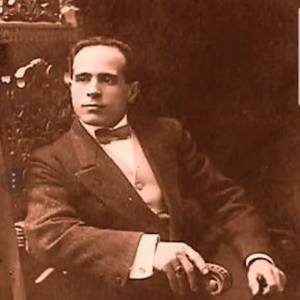 In 1901 he moved to Rome, where he managed to get an audition with the famous baritone and teacher Antonio Cotogni.
In 1903 he participated in a competition for admission to the Liceo Musicale di Santa Cecilia and won one of the two tenor places available. Here, under the guidance of Cotogni, he began his studies as a baritone.
After leaving high school, he studied tenor with the maestro Enrico Sbriscia and, later, in 1905, thanks to the recommendation of the famous tenor Francesco Marconi, he perfected his art under the guidance of Maestro Alfredo Martino.
He made his debut at the Teatro Costanzi in Rome on 11th May 1910 as Turiddu In Mascagni's “Cavalleria rusticana” under the direction of Tullio Serafin.
He started his career singing in operas like: "Africana", "Carmen", "Ruy Blas", "Andrea Chénier", "Cavalleria rusticana".

On 12th May 1910 he made his debut at the Teatro Costanzi in Rome in “Cavalleria rusticana”. In January 1911 he sang at the Petruzzelli in Bari in "Ruy Blas" by Filippo Marchetti, which he resumed in June of the same year alongside the soprano Conchita Supervia and the baritone Francesco Cigada, followed by his debut in "Carmen" by G. Bizet.
However, the event which really solidified his success took place in Milan at the Teatro alla Scala on the evening of 20th January 1912 with Isabeau by Pietro Mascagni (its premiere in Italy alongside the Teatro La Fenice in Venice) with Adelina Agostinelli-Quiroli and Giuseppina Bertazzoli with direction by Tullio Serafin. De Muro was crucial for its triumph, while the opera bombed at La Fenice, directed by Mascagni himself.

Here it will be useful to quote the words of the aforementioned master Tullio Serafin about this event:

I immediately provided for the choice of the tenor who was to play the difficult and impervious part of Folco. And I chose a young man, almost a rookie: I have always tried to give some confidence to young singers, and I have never regretted it. That young man was a Sardinian and his name was Bernardo De Muro. His voice had such intensity, and such a ring of high pitches, that it was ideal for the part. I spent the whole summer preparing him, with fraternal dedication; and he deserved it because he was good, enthusiastic and disciplined in his study. My commitment, however, also came from a certain concern: I knew Mascagni's personality from experience; I was afraid that he might try to put a spoke in the wheel, and I wanted to take all possible precautions to craft an impeccable performance.

When I'd finished preparing the tenor, I entrusted him to Maestro Farinelli, so that he would always keep him well practiced in the part. Farinelli was one of my best substitutes, an excellent musician, skilled in preparing singers. And what's more, he was Mascagni's son-in-law! I think I can say that no one could have been more cautious.

But all this wasn't enough. Mascagni came to Milan, listened to De Muro and began to have small reservations, to look doubtful, to look at me with suspicion. What did he want? It wasn't difficult to understand: he wanted to conduct him. So I took Farinelli aside and told him “Try to make your father-in-law understand that there is nothing to be done: I will conduct Isabeau at La Scala, and De Muro will sing”.

Shortly afterwards, Isabeau was announced at La Fenice in Venice, on the same day as the premiere at La Scala and conducted by the author. War had been declared. And this was backed up on 20th January, the evening of the premiere, when I saw an official from the Milanese Prefecture appear in the theatre, with orders to suspend the performance. The reason? The author didn't approve of the performance, because of the tenor, who was neither ready nor suitable for the part of Folco. Well, that time the intimidation didn't work. The order had arrived when the doors of La Scala had already been opened and the public had begun to pour in. The "protest" therefore no longer had any executive value. And the show went on. Of this I will only say that, when in the first act the tenor had to make his call to the falcon, De Muro performed the call with such vigour that the whole room was vibrating. Small, skinny and short as he was, he was excited by the danger he had encountered; his soul was upset, and it was also for this reason that his powerful voice came out so impetuously as to seem like a cry of protest. At the end of the song the audience's emotion was unleashed, with one of those surges of noise which those who were there will surely never forget. De Muro not very suitable for the part of Folco? And to think that for many years he was the Folco par excellence, everywhere!

In fact, as soon as the next 24th April he played Folco alongside Maria Farneti at the Teatro Grande in Brescia and then on 4th May at the Alighieri Theatre in Ravenna.
Later at La Scala he sang in "La Fanciulla di Pskov" by Rimsky-Korsakov (Tutcia) alongside Feodor Chaliapin and Tullio Serafin on the podium, in "Don Carlo" with Nazzareno De Angelis, Giannina Russ and Carlo Galeffi (1912). Also in 1912 he sang in "Carmen" at the Teatro La Fenice in Venice with Conchita Supervia in the title role.
In 1913 he participated in a tour in South America (Buenos Aires, Rio de Janeiro and Rosario) with the Company of Walter Mocchi, where he sang in: “Isabeau”, “Carmen”, “Cavalleria rusticana” and “Iris”.
In the same year he made his debut in Spain at the Liceu Theater in Barcelona (Carmen).

On 14th January 1914 he performed at the Costanzi in Rome in "Isabeau" alongside Gilda Dalla Rizza and Elvira Casazza, and then on the 24th of the same month he played Turiddu in "Cavalleria Rusticana", where his Santuzza was Emma Carelli. In 1915 he sang at the Costanzi for the first and last time in "Aida" and "Fanciulla del West".
In May-June of the same year, the impresario Mocchi, having announced him through a huge advertising campaign, which billed him as the “new Tamagno”, brought him back to South America, to the Cólon of Buenos Aires. Alongside him were: Caruso, Chaliapin, Lazaro, De Luca, Titta Ruffo, Galli-Curci, Barrientos, Rosa Raisa. Then for the second and last time in Rosario with “Aida” and “Carmen”, directed by Gino Marinuzzi.
Back in Italy, in 1916 he enlisted in the Italian Army, where he served his country as a corporal. However, he was allowed to sing in charity concerts and at the Teatro Regio di Parma in "Aida" with Celestina Boninsegna, at the Carlo Felice in Genoa (Carmen) and to debut the role of Manrico (Il Trovatore) at the Teatro Dal Verme in Milan with Fanny Anitua and Domenico Viglione-Borghese.

In 1918 he sang at the Teatro Real in Madrid in Andrea Chénier's first club with Titta Ruffo as Gérard. Here he also sang in "Carmen", "Aida" and "Trovatore".
In 1920 he returned to South America - to Buenos Aires, this time at the Coliseo Theatre with a company which also included Beniamino Gigli and Giacomo Lauri-Volpi.
At the Teatro Municipal in Rio de Janeiro he made his debut in Gomes' “Il Condor”.
The following year he was in Cuba.
In 1923 he sang at the Costanzi in Rome in an extraordinary performance of “Aida” with Ernestina Poli Randaccio and Enrico Molinari, conducted by Pietro Mascagni.

Bernardo De Muro sings “Ah! yes, my love. The horrid flames of that pyre..." from Il Trovatore by Giuseppe Verdi (1926)

Invited by the President of Peru, he participated in numerous concerts in that country. During his trip he met the singer Helen Wait whom he married on 2nd November 1927 in Cristobal (Panama). Their marriage resulted in a daughter, Jeanna Elena (Dina).
After his marriage, his long stays in the United States began, where he sang in numerous theatres, although he never sang at the Metropolitan.
He didn't have a very long career; in fact, after about fifteen years, his voice, which had been particularly tested by his "realist" repertoire, began to have serious problems, forcing him to take frequent breaks, which quickly removed him from the grand "tour" of international theatres.

In 1933 he sang at the Puccini Theatre in Milan, in the world premiere of Virgilio Ranzato's "Campane di guerra".
He gave his "official" farewell to the Italian scene on 31st July 1938, in Rome (Terme di Caracalla) with his famous "Isabeau" directed by Pietro Mascagni.
While the final farewell took place at the Brooklyn Academy of Music in New York on 15th October 1944, with “Aida”..
During his career he sang in: 380 performances of Isabeau, 198 of Aida, 194 of Il Trovatore, 140 of Fanciulla del West.

Gifted with rare vocal power and a splendid high register, he was held back by his short stature (barely five foot) which prevented him from playing certain characters without being ridiculed, as he himself said in his autobiography “When I Was Folco”: "If I'd been four inches taller, I would have sung Norma, Othello and other works which call for an ornamental figure…".
After retiring he taught singing in New York until 1954.
Bernardo de Muro died in Rome on 27th October 1955.

Bernardo De Muro recalls some episodes of his career

He left behind a very interesting discography, made up of forty-nine discs at 78 rpm (two of which are unpublished) ranging from 1912 to 1928. They were reissued in full on CD by the Bongiovanni record company in 1981, on the centenary of his birth (see the dedicated discography page).

His records don't get across all the splendour of his register, but they nevertheless reflect its ease and beautiful temper, while also highlighting the powerful phrasing. The passages from Isabeau and from the Maiden of the West are particularly noteworthy.